Black Entrepreneurs Feel the Pull to Locate in Royal Oak: Here’s Why

Black entrepreneurs looking to open their experiential self-care, entertainment, shops and food businesses have found a spot they like: Royal Oak.

Known for small businesses who have located there and stayed, Royal Oak saw this new crowd of entrepreneurs open in the city, many during the COVID-19 pandemic.

About 20 Black-owned businesses have storefronts now in the Royal Oak area, according to the Greater Royal Oak Chamber of Commerce.

“Just being able to have a location where people are predominantly coming for friend linkups or date nights and a lot of activities is really important,” said Charvae Golden, co-owner of the selfie shop and karaoke lounge Icon Pix Studios. “And then being able to make something a little more intimate was really cool.”

Icon Pix Studios, also co-owned by Kayla White, opened in September.  The business utilizes two buildings for each activity, and also hosts a variety of themed events and birthday parties. 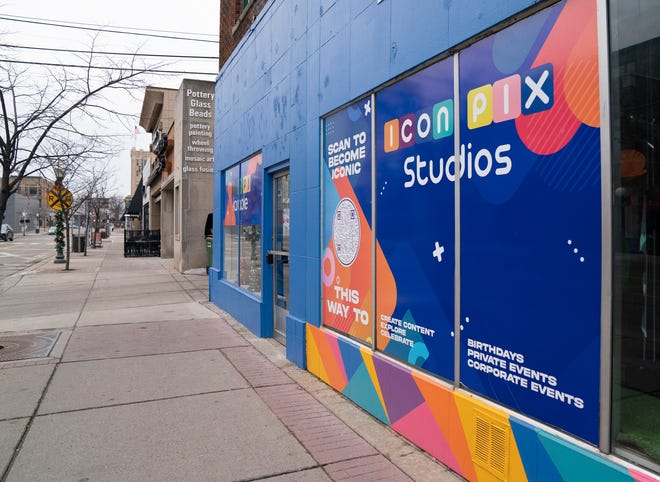 “Being able to also capitalize off of [clientele] being able to rent the whole space if you have a larger party,” means the space can accommodate  “anywhere from 18 guests all the way up until 50,” Golden added.

The business’s royal blue color is bold at 110 W. Fourth St., and you can often see people participating in karaoke from the front window. You can bring your own food and refreshments into a karaoke room starting at $250 or the selfie museum for $25.

The business idea had been in the works when there were only two selfie shops in the region. But there wasn’t one in Royal Oak and adding the twist of karaoke to the selfie museum experience made the business stand out.

“Being a small business and growing a small business, it is very difficult,” said White. “We kind of just wish that we can get that support and that backing from not only our community, but Royal Oak in itself, because, at the end of the day, it’s exposure.”

What the city is doing

Although businesses are still thriving and new storefronts are opening, trudging through the pandemic hasn’t been easy after many businesses faced temporary and permanent closures, along with a decrease in foot traffic. But the city of Royal Oak came up with ways to support its businesses.

“As a city, we’ve taken a very proactive and strategic approach on how to support all of our businesses,” said Todd Fenton, deputy city manager of Royal Oak, “especially our retailers and restaurants that were really dramatically impacted by the pandemic, and still are, to some extent.” 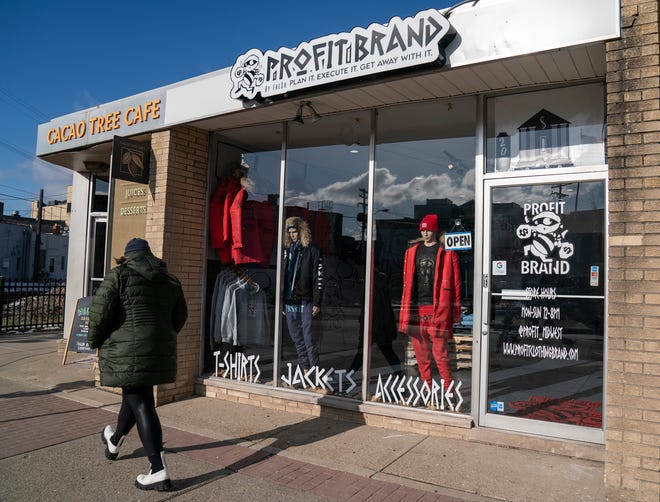 The Downtown Development Authority and the city established a Downtown Dollars program, which has dispersed over $800,000 to small businesses in Royal Oak. Gift cards are given to residents and visitors to use at 60 of the city’s small businesses in an attempt to increase support from the community.

Fenton said there are several businesses waiting to announce their openings and home and commercial property values continue to spike.

“We’re seeing increased investment in our downtown,” Fenton said. “I think some of it has been spurred by things like having Henry Ford and Baker College moving into the area. We just built a new two-acre downtown park, which is going to be a fantastic gathering place both for our residents and people who are visiting the city, shopping and spending money with our retailers.”

One year of business growth 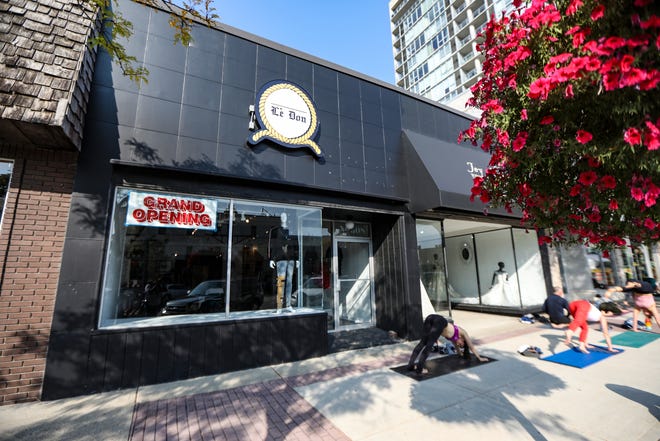 Opening the Le Don Collection in Royal Oak allowed owner Chi Uwazurike to make triple the amount he expected to make in one year. The streetwear store has become an experience, where people can view artwork or attend events. He said most people in Royal Oak have supported him regularly, including the surrounding businesses.

“It just makes me feel great — makes me like I picked the right location to be at,” Uwazurike said, “and that’s the best decision I could’ve ever made — is making sure that the location of my business, I can be proud of it 10 years to come, 20 years to come. It’s just going to keep evolving.”

In order to spread the word about the store, Uwazurike spends time passing out his flyers to businesses and people in the city. He also posts about the business and runs advertisements on social media every day. But he wishes there were more grant opportunities for himself and other businesses in the city. 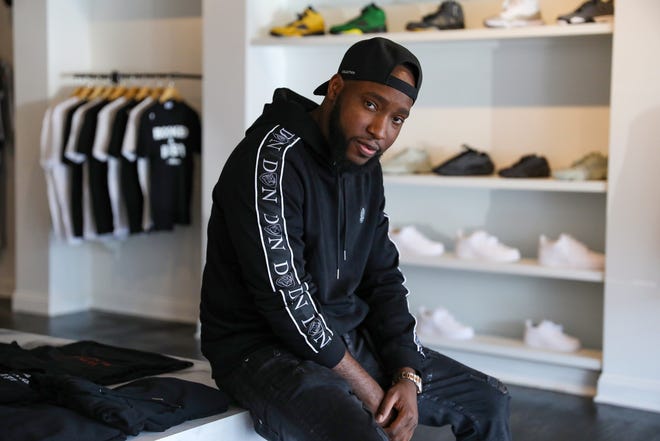 “They come out with the small business loans, or all these things, (grantors) always bring (funding) to the businesses that are downtown located in Detroit,” Uwazurike said. “Never the ones that are in Royal Oak, Southfield. So we’re left out because we chose to be over there. That’s also a disconnect that I kind of want to shed a light on.”

Over a decade of sales

The diversity of Royal Oak is what attracted the store owners of The Accessories Shop and Blu Jean Blues, who have both been located in the city for a while.

The Accessories Shop, which opened in 2007, can dress women head to toe from size small to plus at 511 S. Washington St. Store owner Carla Marshall has seen business owners come and go because of major changes, like the 2008 recession and the coronavirus pandemic.

“I’m glad to say that we have sustained through a recession and a pandemic — we’re still here,” Marshall said. “It can be challenging for businesses. But I’ve seen the city grow.  There’s so much more development now. All of the new apartment buildings, condos that are being built, all of that wasn’t here back in 2007.”

Elledge-Wilson said in the last 10 years that “more people are realizing that Washington is a street that you need to also come and see what’s around here. We actually have more shopping than Main Street does, and Main Street has more restaurants than we do. So that allows people to be able to walk into different individual small shops and be able to find something different.”

Opening during the pandemic

Many businesses got their start during the pandemic, despite the many struggles that business owners faced, such as closures during lockdowns, along with the lack of access to capital.

Profit Brand is a high-end outerwear and streetwear store where there is something for everyone. You can find the brand at 202 W. Fourth St., but its products also are sold online and in stores in cities such as Detroit and Chicago, and in states such as California and New Jersey. The store also hosts pop-up shops for female business owners to sell their products, which will restart in February.

“Before we opened, all the customers were buying all our stuff,” said owner Trevor Coates, of Southfield. “It’s still somewhat that way. Our last big release we had was last year (2020) in February. We had released jogging outfits and we sold probably 100 in four hours.”

The store opened in 2014 in a building at Grand River and Lahser in Detroit. It closed in 2017 after Coates went through a phase of burnout. But the customer base was still there. A year later, he decided to drop a few items, which sold out the same day.

By 2020, Coates had an opportunity to open in Berkeley, California. But the pandemic started and paused those plans. After some thought, he felt the space of the original Burn Rubber shoe store location in Royal Oak would be the best place to open his store, and now the business gets worldwide traffic online and in-store.

Boutique One 11 has been open for almost a year. In the store, you can get a variety of women’s jeans, skirts, blazers, T-shirts and sweaters. The store also can custom order pieces, and it hosts events and pop-up shops. The city attracted store owners and friends Crystal Banks and Shanesia Fox because they feel the city is very laid-back and lots of fun at the same time.

“Everybody [in Royal Oak] just wants to live, have fun and enjoy life, so it was just somewhere that we really enjoyed coming and eating, and even going out,” Banks said. “We both really like Royal Oak, so that’s one of the things that drove us here.”

Because of the welcoming environment, Banks and Fox said they plan to remain in the city for the long run.

“I see us becoming more than just a boutique store, but more like a fashion retail store, and having more than one location,” Fox said. “I think that we will probably always want to stay in Royal Oak, but also expand. Downtown Detroit seems really great to be in. The atmosphere and environment are changing, and it would be great to be a part of it.”